Opening a pocket full of Herkimer Diamonds is one of the greatest thrills any rock collector can experience. You are the first person to ever see the contents, and as you pull out and examine the perfect, sparkling, gemmy crystals you experience a joyful feeling that is truly indescribable. Here's a report on my 2001 4-day mining expedition to Treasure Mountain, a now-closed fee-digging area in Little Falls, NY. 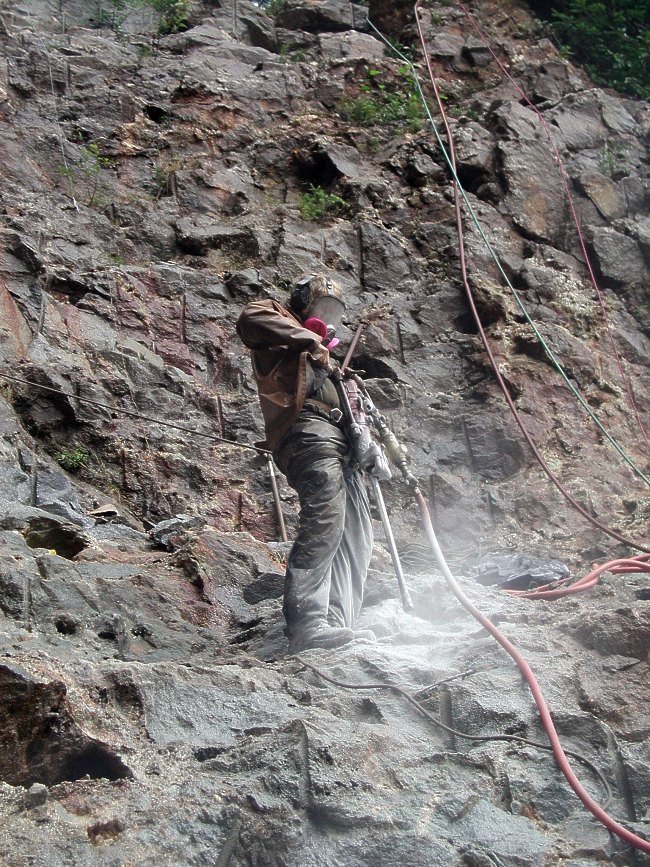 If so, then THIS IS YOUR BIG CHANCE!

Collecting at the Blue Pit on Plumbago Mountain in Newry, Maine

THE PLUMBAGO MOUNTAIN STORY
Newry Hill, a spur off Plumbago Mountain, is the most prolific tourmaline producer in Maine. Since its discovery in 1898, production from the mine has exceeded thousands of kilograms of high-quality tourmaline. Then, in August 1972, three amateur mineral collectors traveled to Newry, Maine for a weekend of digging to see if they could find any tourmaline. They hit a series of small pockets containing gem crystals that were so promising that they leased the property, and in October opened some major pockets. This was to become the largest discovery of gem tourmaline in the world, producing one metric ton of fine-quality tourmaline, consisting of many variations of colors never seen before. Overnight, the lives of the collectors who made this legendary find were changed forever.

Note: Have you ever dreamed of traveling to a foreign country and buying up and bringing home thousands and thousands of dollars of mineral specimens? I know I have, and in the process I've romanticized the trip into a series of exciting collecting adventures in fabulous localities in the most remote corners of the globe, where I buy the most fantastic and beautiful crystals for pennies. Alas, the reality doesn't come anywhere close to my fantasies (it never does, does it?), but I have been enjoying for several years the opportunity to be an armchair traveler when my friend Mike New heads to Mexico to buy minerals. Here is his latest report, which he has generously agreed to let us share with you. Enjoy! - Eric

Today was a mineral shopping day in Araçuai. We visited 4 warehouses: Mineração Zé da Estrada (run by the owner of the hillside in Taquaral with all the mines that we visited yesterday), Tony Gemas Mineração, Marcos de Zé da Estrada, and Emerson Murta's Ie Pedras do Brazil. I got some fantastic cathedral quartz and cathedral citrine, half a dozen pieces of superb black kyanite (best I have ever seen), some nice rose quartz crystals, brazilianite, and several outstanding specimens of the rare phosphate mineral eosphorite.

Report on a November, 2015 Pyrite Collecting Trip to Spain

David contacted me in the summer of 2015, to ask about going to Navajun to collect. He is an avid collector, Chemistry Professor Emeritus at the University of Wisconsin-River Falls, and President of the St. Croix Rockhounds of Stillwater, MN. David asked a bunch of questions about what it is like collecting at Navajun. Apparently I answered his questions satisfactorily because in late November he and his wife Becky Kleager made the pilgrimage to Navajun, Spain to do some pyrite collecting at Mina Ampliación a Victoria. Below is his report. -Eric