VISIT TO A DINOSAUR TRACK QUARRY

It was a sunny day in early August, 2017 when I had the opportunity to visit a quarry in Granby, Massachusetts. The property is owned and operated by Cornell Nash, the sole heir to the quarry which was founded in 1939 by his father, Carlton Nash. When I arrived, Cornell was sitting in his office, in the corner of a large one-room store made of cement blocks that his father built.  Displayed on rustic wooden shelves are plastic dinosaurs, myriad inexpensive fossils, budget mineral specimens, and similar "tourist" items geared to the wallets of his most frequent visitors: children with their parents on vacation or with teachers on school field trips. About half the shelves are stocked with dinosaur footprints, the item that makes this locality unique: this is the only place in the entire world where you can buy genuine fossil dinosaur tracks right off the shelf.

Cornell leads me out the back door and onto a gravel path leading into the woods up a slight hill to a shallow, open pit. The quarry is small, about the size of a baseball diamond. "This is where I dig the tracks," he explains, gesturing toward the gently sloping layers of chocolatey brown shale that defines the floor of the quarry. "It used to be six feet higher," he says. "My father and I have been removing the layers of rock for almost 80 years, searching for tracks." The present-day quarry is directly under the spot where Nash's father discoverede his first dinosaur track. He found it sticking out of the dirt in 1933, but it took him six years to convince the owner of the property to sell it to him. Cornell leads me across the smooth, flat rock, around piles of thinly split discarded layers, and points to a trackway. Half a dozen large tracks stretch across the surface, a record of a long-ago day when a dinosaur walked across a bed of soft mud, leaving deep impressions of its passage over 200 million years ago during the early Jurassic period. The trackway has been left intact to show visitors what the tracks look like in situ. Here and there are rectangular depressions, where a rock cutting diamond saw was used to cut out a track. The layers in the shale are exposed at one point on the edge of stone block, with multiple lines dividing the stone into dozens of thin layers.

To take out the dinosaur footprints, Cornell uses old metal butter knives, which he sharpens to a thin edge. Working from the edge, he drives a line of these into the tight split between 1/2" layers in the shale. He taps them gently with a hammer, just enough to hold, then inserts the next knife in the same crack a few inches away. The goal is to get the rock to crack far back into the ledge, so he can pry up the largest possible slabs – hopefully with multiple tracks or even a trackway of several footprints from a single animal. Working with just these hand tools, Cornell can go through an 8-square foot section representing 5,000 years of geological time in an hour. Fortunately, there is a high amount of mica in the stone, which allows the layers of stone to separate relatively easily.

After a track is separated out, Nash trims the shale to a rectangular shape with a diamond saw, removing waste rock to cut down on the weight. Next, he highlights the footprint using wood stain that draws attention to the details of the track. The stain is not glossy, so it does not add a shiny element to the natural track.

The rock he is splitting is shale, a sedimentary rock comprised of petrified mud. 200 million years ago this was a barren, smooth mud flat beside a river or lake. In what was a high-traffic area, dinosaurs walked or ran across the exposed surface, leaving depressions in the mud with every step they took, as they went to nearby water to drink, or hunted other dinosaurs for food. In soft mud they left deep impressions; in hard mud the tracks are shallower. These baked in the sun and hardened, then the flats were covered with a new layer of fresh mud. This filled in the depressions and left a fresh canvas for more tracks as the dinosaurs crisscrossed the open surface. More layers followed, over the course of tens of thousands of years, and the layers were eventually buried deep below the surface. Eventually mud petrified into rock, and the fossil tracks were preserved as fossils. Though nobody knows the exact frequency of mud layers being deposited, Nash estimates that each inch of shale today is equal to about 10,000 years of deposits.

Dinosaur tracks are trace fossils which are classified as ichnogenus, because they are solely based on footprints. You cannot identifiy a specific species based solely on the track it leaves, just a family. Though there are lots of dinosaur tracks found in this part of the Connecticut River valley, only a handful of skeletons have been found. The wet mud was perfect for preserving footprints, but the bones and flesh mostly rotted away.

Most of the tracks Nash finds are fossil footprints from grallators, a common type of carnivorous two-footed theropod dinosaurs about three to six feet long which left three-toed prints in various sizes, most commonly found in what is now Massachusetts, Connecticut, and New Jersey. Western Massachusetts is the area where Edward Hitchcock discovered tracks of what he thought were gigantic birds. Though this assertion made his colleagues snicker, how ironic that it now turns out that he was right all along, that dinosaurs are now thought to be the ancient feathered ancestors of our present-day birds! Hitchcock was a geology professor at Amherst College who spent years collecting and identifying dinosaur tracks. The name Grallator was given by Hitchcock in 1858, meaning "stilt walker", based on an old term for wading long-legged birds like storks and herons. The grallator is thought to be a dinosaur similar to Coelophysis.

It was in the neighboring town of South Hadley in 1802 that a 12-year old farm boy name Pliny Moody plowed up the first known dinosaur tracks. He used the slab as a doorstep, and eventually gave it to Dr. Elihu Dwight, who christened it "the tracks of Noah's raven," a biblical reference to the raven Noah released from the ark. Dwight later sold it to Hitchcock, and today it is in the Amherst College collection. 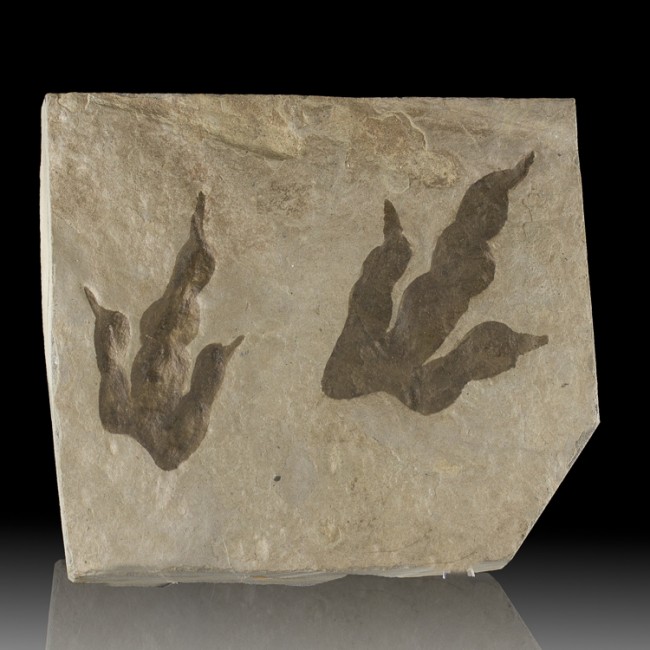 In 1835, in nearby Greenfield, Massachusetts, the first tracks that were studied by scientists were discovered by Dexter Marsh, when he was quarrying slabs of rock for street pavers in Gill, Massachusetts. Locals called them "turkey tracks". The tracks were recognized and studied by Dr. James Deane, who wrote to Hitchcock about them. In 1847 Hitchcock theorized that they were the tracks of unknown ancient birds. He later gave the name ichnology to the study of trace fossils, such as dinosaur tracks. 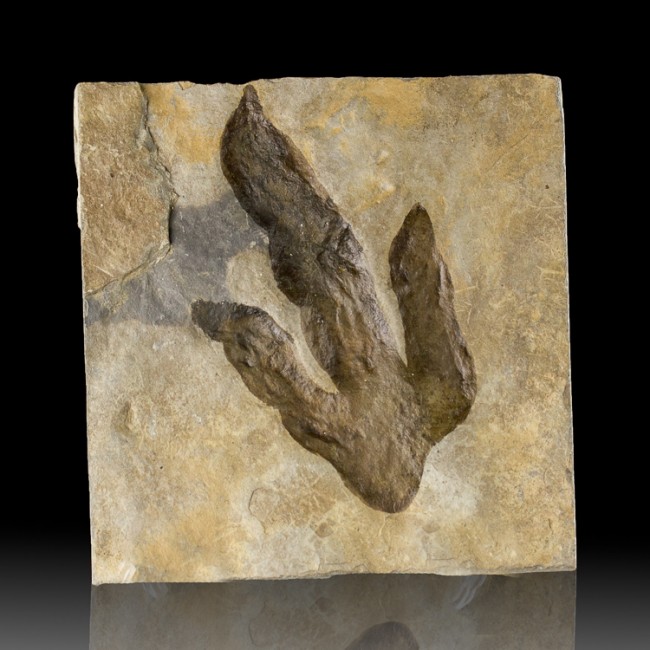 Back in the shop, I began to search through the footprints Nash had set out for sale. The prices range from under $100 for a partial track up to thousands of dollars for a really good one that will end up in a museum. Nash says he takes out only 400 or so tracks a year, and sells all of them. There are two types of tracks: those that are direct impressions, the indentations in the mud where the dinosaurs stepped are the negatives; and the cast of these impressions, the mold made by the new layer of mud that filled the impression are the positives. My focus was on choosing the negative tracks, as I prefer these and think of them as the "originals". Nash had also quarried a handful of matched pairs, with both the negative and the positive of the same track - these are the creme-d-la-creme. It only took an hour to look at all of the hundred or so tracks Nash had prepared. I picked out what I felt were the best 20 tracks. He added up the total cost and boxed them up for me. 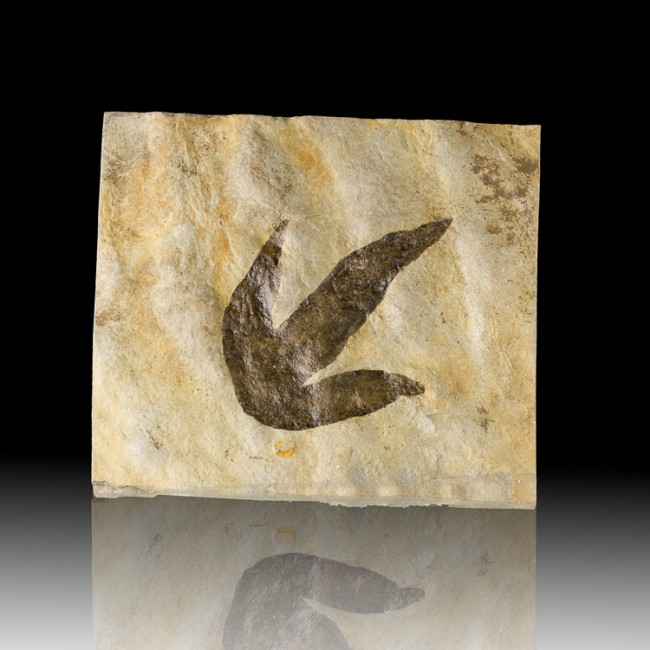 I took them home, and later photographed them and listed them on our website where they are available for sale. Click here to see what we have listed, or email us to see if we have any other tracks in inventory. 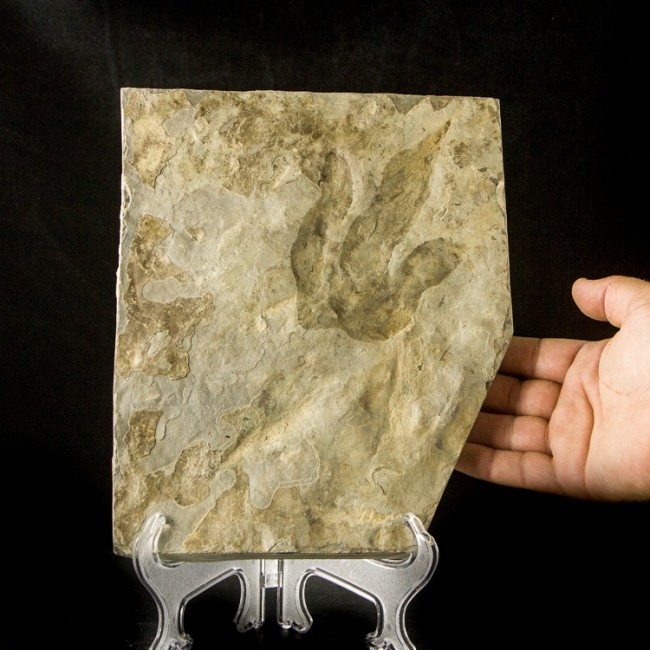