The earth is a big place with a lot of out-of-the-way places where Mother Nature has created some truly odd and amazing geological formations. Here are pictures of what are frequently described as the 25 strangest geological formations on Earth -- locations that for the most part I had never heard of or seen before. Enjoy! China's Zhangye Danxia mountains were formed on red terrigenous
sedimentary layers that have been eroded for 24 million years. At the heart of the abandoned salt mine Yekaterinburg, Russia.
This is a disused Carnallite mine for several years. The Hillier lake on the island of Middle Island has a pink water.
The color is caused by algae. It was discovered in 1802 by a British explorer. Jeju-do Island in South Korea is the remains of a volcanic crater.
Natives call it Island of the Spirits.

The Door to Hell in Uzbekistan is a hotbed of
continuously burning natural gas in Russia. Fly Geyser is a small geyser in Washoe County, Nevada, which gives
the impression of a brilliantly colorful sea creature rising out of the water. The Great Blue Hole is an underwater cenote off the coast of Belize.
It is almost circular with a diameter of 300m and 120m deep. 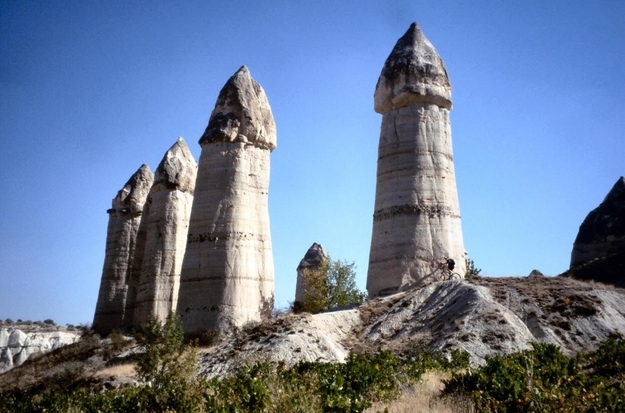 These fairy chimneys in Cappadocia, Turkey, were created by millenia of erosion.
People have carved houses and hotels into the structures. 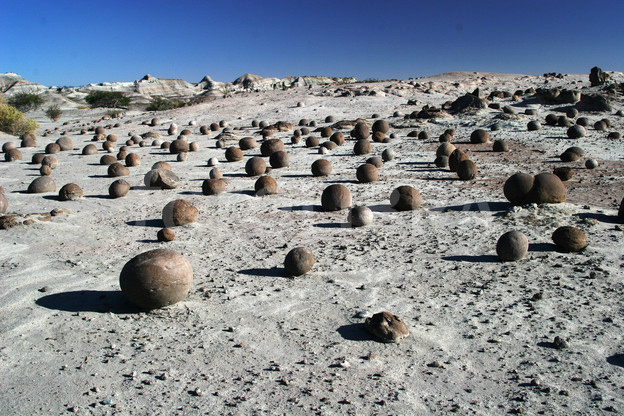 Valley of the Moon, in Argentina, features a valley filled
with weird round boulders, making an otherworldly view.

The Eye of the Sahara in Mauritania, also known as the Richat Structure, resembles
a bull's-eye 30 miles (50 kilometers) wide. It is the result of uplifted earth worn down over time by wind
and water, with different rates of erosion on the varying rock types forming concentric ridges.

This stunning formations, located on the border of Arizona and Utah, is called
"The Wave". It is made of 190-million-year-old sand dunes that have turned to rock.

At Bryce Canyon National Park, the natural rock formations were caused by wind and water
erosion on limestone. The colors of red, orange, and white provide an ever changing visual treat.

The Grand Prismatic Spring in Yellowstone National Park is the
largest hot spring in the United States, and the third largest in the world, Yavapai point view in Grand Canyon National Park may provide one of the best
panoramas of the inner canyon, the Colorado River, and Bright Angel Canyon. Petra is a historical and archaeological city in the southern Jordanian governorate of
Ma'an. It is famous for its rock-cut architecture and water conduit system.

The selenite crystals in the Cave of the Crystals in Mexico reach sizes larger than houses,
by far the largest such crystals known on the planet. They grow at incredibly slow rates,
gypsum formations that take as long as a million years to reach more than two stories tall. 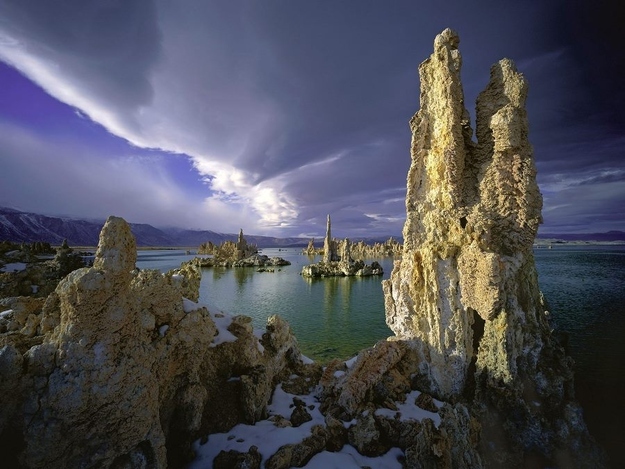 Mono Lake looks more like some alien planet than a Californian lake.
The extremely salty lake was formed by volcanic activity
(and its still active!) and boasts some of the spookiest pillars of salt ever. Mount Roraima is a South American mountain overlooking
the clouds and rising to over 9,200 feet.

Pamukkale, which means "cotton castle" in Turkish, is found in the mountains of Turkey. The
mineral-rich waters of the area's hot springs have over time formed dazzling white limestone terraces.

Known as Sahara el Beyda, this barren stretch of unique land in Egypt
is famous for its white cream color and its massive chalk rock formations
that are the result of occasional sandstorms in the area.

The Giants Causeway is an area of about 40,000 interlocking basalt columns,
the result of an ancient volcanic eruption. The tops of the columns form stepping
stones that lead from the cliff foot and disappear under the sea. These natural limestone columns in China measure over 35 feet
high, and are formed by a process of erosion.

The Chocolate Hills is a geological formation in Bohol Province, Philippines.
There are at least 1,260 hills which are covered in green grass that turns
brown (like chocolate) during the dry season, hence the name. Litlanesfoss is a series of waterfalls surrounded by basalt
columns, and is located in Upphéraðsvegur, Iceland.